The Eurovision Song Contest 1957 was the second edition of the annual Eurovision Song Contest. It was held on Sunday 3 March 1957 in Frankfurt-am-Main, West Germany. It was won by the Netherlands with “Net als toen”, performed by Corry Brokken. Like the first 1956 edition, this one was still mainly a radio programme, but there was a noticeable increase in the number of people with televisions.

For some time, a rumour had existed that the privilege of hosting the 1957 contest was given to Germany because they had come in second place in 1956 with “Im Wartesaal zum großen Glück” by Walter Andreas Schwarz. In fact, not only were the official 1956 scores withheld, but the rule stating that the winning nation hosts the next year’s Eurovision Song Contest had not yet been conceived. It was planned at the time that each participating country would take it in turns to host the event. However, as more countries wished to participate, this became impractical. 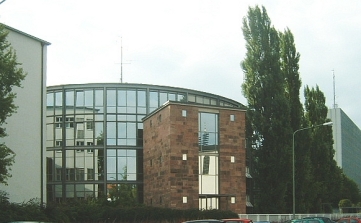 The contest took place in Frankfurt am Main (or simply Frankfurt), one of the largest cities in, at the time West Germany. The host venue was the Großer Sendesaal des Hessischen Rundfunks, a building, music hall and former television studio based in Frankfurt am Main. Today it is used as a music hall.

After being devastated in the Second World War during the early 1940s, Frankfurt rebuilt itself well into the 1950s into one of Europe’s most prominent financial centres. With investments coming in from both national and international financial institutions, 1957, the year of the contest, already saw the first of Frankfurt’s high-rise business buildings.

In this year’s contest the Italian entry lasted for 5:09 minutes, whilst the UK’s entry lasted for only 1:52 minutes. It was because of songs like the former that a rule was eventually introduced restricting each song to a maximum of 3 minutes; this rule still applies.

In a change of rules from the previous year’s contest, duos were allowed to compete. Danish representatives, Birthe Wilke and Gustav Winckler, were the first of such acts to participate under this rule change. At the end of their performance, the couple exchanged the longest kiss in the contest’s history, although only people with televisions could actually see it. This was due to a member of the production staff forgetting to give a pre-arranged sign that the kiss should end.

This was the first year where the juries were contacted by telephone. It was also the first time the Netherlands won the contest. Another notable change was that the national juries could not vote for their own song, a rule which would be continued throughout the contest’s subsequent history.

Belgium, France, Germany, Italy, Luxembourg, Netherlands, and Switzerland make their second appearances following their débuts in 1956. Austria, Denmark, and the United Kingdom made their débuts; these countries had wanted to participate in 1956, but had applied to the European Broadcasting Union after the deadline for song submissions for that year’s contest had passed, thus missing it. With those joining in 1957, the total number of countries was ten, three more than in the first ever contest.

Each performance had a conductor who maestro the orchestra.

The contest saw the return of two artists who had participated in the previous edition of the contest. Corry Brokken for Netherlands; and Lys Assia for Switzerland.

The table below shows the order in which votes were cast during the 1957 contest along with the spokesperson who was responsible for announcing the votes for their respective country. Each national broadcaster also sent a commentator to the contest, in order to provide coverage of the contest in their own native language. Details of the commentators and the broadcasting station for which they represented are also included in the table below.